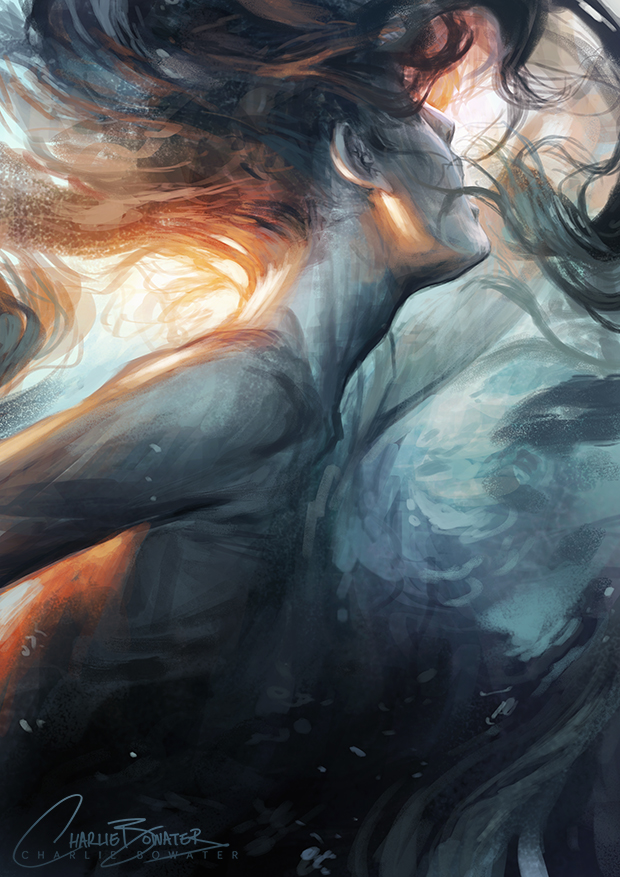 Friday night: story time! I’m having some trouble thinking up concepts and characters on my own at the moment, but, luckily we have the internet! This time it’s from another beautiful prompt from Tumblr {yes again!} The premise was cool and it had mermaids in them, so I couldn’t resist. It’s a bit darker than you might be used to, but I’m trying new things! Hope you enjoy and tell me what you think!

…“Commodore, please, you don’t have to do this!” I begged the stoic man standing on deck, his hands clasped tightly behind his back.
…“I’m sorry, miss Courtenay, I’m afraid I must.” His voice sounded truly apologetic, and I might have felt sorry for him and the misfortune that had befallen him and his crew, if not for the fact that he was going to kill me.
…“It’s an old wives’ tale,” I tried to argue, “tossing me off your ship won’t actually bring you luck. You’re a man raised in civility, surely you must know this?” I was getting desperate now, standing on the rickety plank, arms bound behind my back and legs tied together. A heavy stone resting next to me.
…Commodore Harrison was already shaking his head. “If we wish to reach Fort Orange without more dead we must make this sacrifice to Her, to the sea. I truly wish there was another way, Lucia, I truly am sorry.” He looked at me for a moment, eyes cold and unyielding. “Do it.” He ordered.
…I screamed as the plank underneath my feet was suddenly pulled away. Pain slashed through me as my head cracked against the wood. I managed to gasp in a breath just before I was dragged under the waves.
…It was so cold.
…I tried frantically to free my arms or her legs, anything so I could swim back to the surface and breathe. It was no use, the knots were too tight. I stopped thrashing for a moment to look around me, to try and find anything I could use to get myself free. Blood curled lazily up through the water, both from the wound on my head and from my wrists chafing against the coarse rope. Were there sharks in these parts? I wondered absent-mindedly, would I live long enough for it to matter?
…The stone dragged me deeper and deeper, the surface above now impossibly far away. I am going to die here, I realized, sudden and unbidden, this was where I would meet my end. The frantic struggling became less as my strength died away. Where first there was the peaceful silence of the sea there was now a rushing in my ears. Like the roaring of the waves. The burning in my lungs overshadowed the pain from my head as I tried with all I had to keep this thread of air within my body. Not ready to give up yet. Not yet.
…The ship was now moving away. They had made their sacrifice and thought themselves safe. Fools. I wished so badly that I could reach up, clench my hand around the hull and crush it. That I could drag those who have killed me down with me to their own watery graves.
…Goddess grant me my dying wish, I prayed, let those bastards die as I will, with Your blood filling their lungs and Your vast darkness surrounding them.

…Movement then, something coming towards me at impossible speed. The fading light catching the glimmer of scales and pale hair. But they are a myth, I thought as three mermaids surrounded me. One had a tail the colour of peridot, her eyes sparkling with mirth. A flash of pale purple filled her vision as the second mermaid circled her slowly. The third had scales of burnished gold, shining even in the dark.
…Sister, I heard the last mermaid speak, her voice within my own head, She has heard your prayers. We’ve come to your aid. Yet they weren’t moving to free me.
…Why weren’t they helping me? Couldn’t they see I was dying?
…We are helping, sweet sister. But She needs you to die first. The mermaid reached out a webbed hand and gently caressed my bleeding face. Let go. Let go of who you were before and become who She wills you to be.
…Maybe the mermaids were a vision, sent by the Goddess. If I were to give up, if I were to die here, now, would the Goddess grant me my dying wish?
…And so much more. The mermaid confirmed.
…Let go. Three voices echoing in my head now.
…So I let go. I ceased my weak struggling and released my final breath, watching as the bubbles rose towards the surface.
…Another moved forward, her scales and hair a pale lavender. Webbed hands reached out and cupped my face, pulling me in.
…The mermaid is kissing me, I thought, no, not kissing, breathing. Air filled my aching lungs once again, but oh, how this burned. A tendril of glittering magic left me on the exhale, and the mermaid breathed for me again, twice, three times before the pain struck, sudden and blinding. Bones crunched and shifted, scales poured out what was once skin. I screamed, the tortured sound changing in the water, becoming a melody, a Song.
…For a single moment, my heart stopped.
…It started anew, the rhythm and cadence different, tranquil like the sea. I was reborn. My legs were no longer bound together, but then, they were no longer legs, were they? My tail easily slipped out of the ropes. I admired it for a moment, the blue-black scales almost invisible in the darkness. I looked upon the three mermaids again, my sisters now. I could feel them on the edge of my mind, and there were more, I knew, further away. Waiting for their newest sister. I opened my mouth to speak but only the Song came out.
…Like this, the one with the lavender scales said, her voice a caress in my mind. She felt amused and excited.
…Hello, I tried.
…They smiled at me. Hello, the three voices echoed.
…Such rage still within her, the one with green scales said, I like her.
…She is beautiful, whispered the second as she twirled a lock of my blue-black hair between her fingers.
…Yes, agreed the third, her golden hair like fire beneath the waves, vengeance and rage and beauty. We shall call you Tempest.
…Tempest, I tried. Yes, I liked that name very much.
…The ship of my murderers was getting smaller in the distance and I longed to go after it, to drag it down to the sea floor.
…Don’t worry, little sister, their voices, Coralia, Briny and Halcyon I knew now, echoed, we will easily catch the ship.
…Dark glee filled me as we started the hunt. The thrill of it ran through us all as more sisters joined our chase. It would be easy now, I thought, now that I had found my Voice and my family. Together we would lure my murderers to us, break their bones on the rocks and drag them down into the deep. We would hold them to us until the life left their eyes and they breathed their last breath. We would raise our Voices together, a single note that had but one meaning: revenge.

So that’s it for this week’s tale! Join me next week for another adventure!