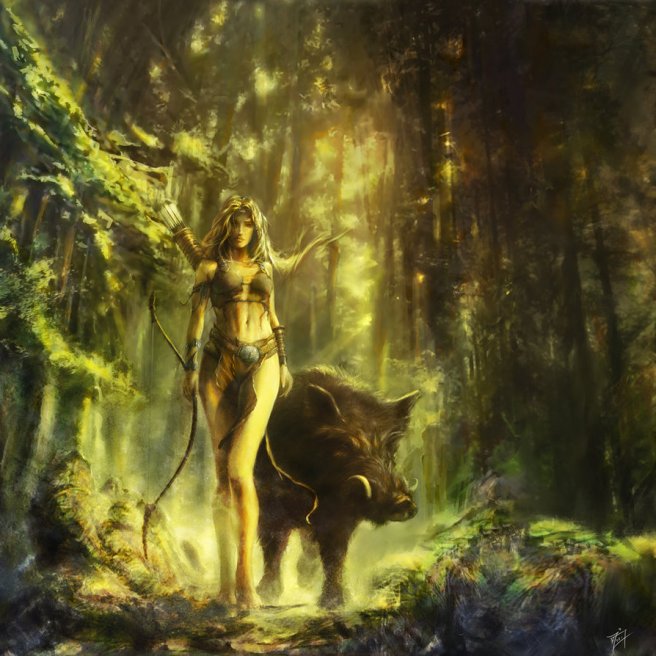 Are you guys and gals ready for part 2 of our Dutch Deities for RPG’s series? ‘Cause here it is! Last time I gave you a quick rundown on a few Dutch deities with their corresponding alignments, domains and symbols. Quick and ready to use for your favourite pen-and-paper RPG. Today we’ll dive a little deeper into the myths surrounding these deities and why I chose these specific domains and symbols for them. So here we go!

Arcanua
There is not much that we know about this Goddess. All that was found was a bronze and enamelled statue of a rooster, standing on a leaf. The name Arcanua was on a small bronze plaque. Her name means ‘the mystical one’ or ‘the mysterious one’, which is why I linked her with the trickery domains. The back of the rooster has a hole in it, presumably to either burn oil in it or stand a candle. Of course the rooster itself has some ties to the sun and the early morning light, hence the light domain.

Arduinna
The Goddess of the Ardennes. These vast forests were even bigger back in the day, probably spanning a good part of the Netherlands as well. A statue of Arduinna was found where she was sitting on top of a boar, hence the fur and animal domain. She is similar to the Goddess Diana, a protector of the forest and its creatures.

Aulrinia
Not a Goddess, but the mythology fit too perfectly to not include her. She was a famous völva, a Germanic priestess believed to have gotten her powers from the elves, which is why I made her Elven. The völva were seers, healers and witches. The name Aulrinia is closely related to the word Alruin, which is the Dutch name for Mandrake, which explains her symbol.

Baduhenna
Of all the Dutch Gods and Goddesses, this is my favourite. Her myths tell of a fierce battle taking place in ‘the Forest of Baduhenna’, between the Frisians and the Roman oppressors. The Frisians were familiar with the terrain and managed to kill 900 Roman soldiers. Then something weird happened. The remaining Romans, filled with paranoia, killed another 400 of their own men. This gave Baduhenna a quite fierce reputation of being a Goddess of battle, war and madness.
The name Baduhenna also has some connections to the Celtic Morrigan, another Goddess of battle and madness. The suffix -henna is simply a way to note that she is female. Badu looks and sounds similar to Badb, the battlecrow. She is part of the Morrigan and is known to fly over, in crow form, and bless her favoured side of the battle, while causing confusion and fear to the other side. This is why, at least to me, Baduhenna has a strong connection to ravens, and perhaps is even an aspect of the Raven Queen from D&D’s fifth edition.

Fosite
A God/dess worshipped on the Dutch isle of Ameland. They are known both as male, under the names Fosete, Fosite and Forste, and female under the names Fosite and Fosta. Which why for this purpose they are both male and female, a duality within one deity. The name seems to be linked to the Germanic God Forsite, the God of justice and peace. Fosite had holy wells dedicated to them on Ameland, which is why their symbol is a clear drop of water. People who got water out of these wells did so without speaking. This was done both out of respect, and because they apparently were a force to be reckoned with when angered.

Hesus
The only God I could convert into an Evil alignment. The only evidence of this God has been found in France, but scholars believe that the town of Hees gets its name from this God, and therefore believe that he may have been worshipped in the Netherlands as well. In Hees there was an enormous linden tree which was probably used for human sacrifice, perhaps to this fearsome God. In 1903 the tree fell after being struck by lightning.

Hludana
In several rivers in both the Netherlands and Germany votive stones have been uncovered naming this Goddess. A few of these reference to the stones being offered up by fishing guilds that resided in the area. Quite simple and straight forward, this one!

Irmin
A God of war which was worshipped on the Dutch Veluwe. He is believed to be related to the Germanic Tyr or Tiwaz, another God of war. Possibly this God was one of the most important Patron Gods of the Saxons. The Saxons celebrated their festivals around a huge pillar called the ‘Irminsul‘, which was believed to be a symbol for the Yggdrasil or ‘World Tree’.

Jecha
Not a lot is known of this Goddess. She is a Saxon Goddess of the hunt who was worshipped in Drenthe. The name Jecha is derived from the word ‘jach’ meaning hunt. This Goddess is believed to be similar to the Goddess Diana, Goddess of the forest and hunting.

Lady Holle
This is a bit of a tough one, because this is where a lot of folklore, myth and fairytales start mixing together. In the Netherlands the tale of ‘Vrouw Holle‘ is a very popular fairytale, speaking of an enchantress who makes it snow in the world by fluffing up a pillow. She punishes laziness and rewards those who do household chores without complaint. She is thought to have connection with the before-mentioned Hludana. The brothers Grimm stated in their books on Teutonic mythology the possibility of a Germanic Goddess called Holle, Holda or Huldra. So we’re not sure if she even was a Goddess, or just a fairytale, but I think she still makes and awesome deity.

Meda
A Goddess of purity, innocence and virginity who was also called Medea. She was called upon by young daughters for protection. There is no connection with light in itself, but a vision of beauty and purity is in my mind one of goodness, healing and hope.

Nehalennia
The most famous and well-known Goddess of the Dutch pantheon. She was a Goddess who was worshipped in Zeeland and was connected to our North Sea. Dozens of votive stones dedicated to her have been found, all of them thanking this Goddess for a safe sea passage. Some of these stones were recovered in England, meaning that she was worshipped on both sides of the passage. A lot is known of this Goddess, but the most important aspects of her are that as a Seagoddess and protector of travellers.

Sandraugina
In Brabant a votive stone dedicated to this Goddess was found, sacrificed by worshippers of her temple. The stone was decorated with cornucopias and branches filled with leaves and apples. Which is why Sandraugina is thought to be a Goddess of abundance and prosperity.

Tamfana
Another difficult one. Looking at the history books, there is only one mention of the name Tamfana, which speaks of the destruction of the sanctity of Tamfana. The people there were celebrating one of their holy festivals, and were said to be too drunk to fight back. It’s not know where this sanctity was located or even if this Tamfana was a God or a Goddess, or perhaps neither. Since -fana means sanctity it’s entirely possible the name of the deity was actually Tan or Tam.
However, the people of Oldenzaal claim that this Goddess is bound to the Tankenberg, and more in particular a large stone that lies there. Some interesting myths surround this place, supposedly there was a temple dedicated to Tamfana there, where the Goddess would use a golden chalice to divine a person’s future.

Viradectis
Votive stones dedicated to this Goddess have been found in Belgium, Scotland and the Netherlands. Not a lot is known of this Goddess, but the stones have been sacrificed by the Tungri, a Germanic tribe of well known tradesmen and seafarers. They probably traded grain, which was a popular product shipped from Belgica.

So there you have it. A list of awesome Dutch Deities for you to use in your next D&D/Pathfinder/RPG session. If you have any questions or would like some more info on any of these, or other Dutch deities, feel free to let me know! Are you suddenly inspired to make a war cleric of Baduhenna or a tempest cleric of Nehalennia? I’d love to hear about it!