For the last two and a half years wednesday has been our ‘D&D night’. Even though we switched to Pathfinder a few months ago…shh… When you have an obsession with pen-and-paper tabletop games, books and boxes, you tend to find a way to combine these things. So I’ve made some RPG bookboxes for me, my husband and my brother-in-law in the past. Just a little box to take your miniatures, dice and other stuff with you in a cool little package. So when one of our other fellow nerds, Robert, asked me for a bookbox, I asked if I should just go ahead and decorate it too. Of course he said yes 😀 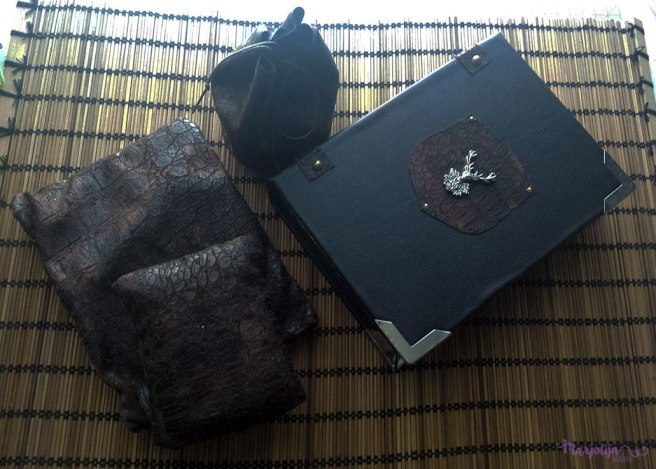 The bookbox was covered in faux black leather. Since his family heraldy weapon has a stag in it, and I know he loves history and heraldry, I wanted to make something with a weapon. I cut the shape from a different kind of faux leather and glued it on. The stag used to be a jewellery charm, but I cut off the rings to make it a cool cabuchon. Next I made a long, thin pillow of the same brown faux leather and filled it with granulate, so the miniatures have something a bit more solid to lay in. A tiny pillow to cover them so they don’t damage. And last but not least: a round bottomed dicebag.

He’s only seen pictures so far, so I hope he likes the real thing! We’ll find out tonight!

One thought on “Robert’s RPG Bookbox”